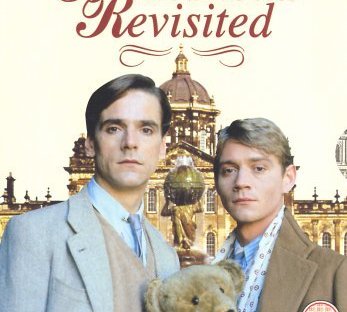 Two years ago today, I defended the major research component of my M.A. in English Literature. My paper was called “Asexual Romance in Brideshead Revisited”. In order to write it, I had to spend a lot of time reading, writing, and thinking about Waugh’s novel, and many of those thoughts work their way into this not-so-mini-review. The mini-series is a very faithful adaptation, adding very little to the story and leaving very little out. As a result, most of what is written in this review is also applicable to the book.

For more of my thoughts, see “The History of Romance”, which summarises my research on romance but applies my findings to Mulder and Scully instead of Charles and Sebastian. See also my review of the movie.

How good is this mini-series?

I first saw Brideshead Revisited as an adolescent. At the time, I didn’t understand it or even particularly like it, but something about it touched me and stayed with me. Twenty years later, having re-watched it multiple times, read the book, seen the movie, and written a forty-page academic paper on the novel, I understand it better and like it better, but still not completely. The same things still touch me, though.

The first two episodes are by far the most joyful, dealing with the love story between Charles and Sebastian. The show effectively and beautifully conveys the thrill of first love and the passion of youthful attachment. Compared to them, the succeeding episodes are sombre and depressing. They also tend to drag. While the pacing is initially good (the first episode manages to cover the book’s prologue and first three chapters), it seems to slow down as the series progresses (subsequent episodes cover a chapter apiece or less). Still, if the early episodes express the joy of finding love, the later ones just as effectively express the pain of losing it, and of being powerless to help your beloved. I enjoy the dry humour of the series. The characters are sharply drawn and endearing. I also really appreciate that Julia is developed as a character in her own right, and not simply as a love-interest for Charles. However, the flip side of this is that we don’t get much sense of why they fall in love, and their romance feels rushed and arbitrary. And while I think I understand where the show is going in terms of its spiritual message, I’m not sure it ever gets there.

How ace is this mini-series?

That depends on how you interpret Charles and Sebastian’s relationship. Many people prefer to view it as sexual, but, since sex between the boys is never confirmed, it can just as easily be seen as platonic. Either way, love is clearly involved and, I would argue, even romance. In “The History of Romance”, I point out that romantic love was historically characterised as authoritarian, comforting, exclusive, and isolating. All of these qualities can be seen in the boys’ friendship. Charles’s love for Sebastian prompts him to rush to his side when he thinks Sebastian is dying. It also gives him strength to defy those who disapprove of the relationship. Sebastian jealously tries to keep Charles away from his family, who he fears will make Charles their friend and not his. And Charles reassures Sebastian by declaring his loyalty “contra mundum” (“against the world”).

The relationship also resembles a romance in the more modern sense of the word. Sebastian brings Charles flowers, invites him to lunch, and takes him out for picnics. The boys dance together, walk arm-in-arm, and even make plans to live together. Jeremy Irons’s performance makes Charles’s adoration of Sebastian palpable. Charles frets and grieves over Sebastian, and feels “very close to heaven” during their summer at Brideshead. Cara describes the relationship as a “romantic friendship”. In modern terms, I think it could be called a “queerplatonic partnership” or perhaps even an “asexual romance”.

There is no evidence that other characters see the relationship as sexual; however, many of them do recognise its importance to both boys. Lady Marchmain accepts Charles as Sebastian’s friend, inviting him to visit during the holidays, treating him as part of the family, and speaking approvingly of her son’s love for him. Julia and Cordelia both acknowledge Charles’s love for Sebastian. And Lord Marchmain jokes that Charles seems to have a “penchant” for his children.

Most interesting is Cara, who explicitly compares Charles and Sebastian’s love to the heterosexual love between Sebastian’s parents. Subsequent events seem to bear out this parallel, with Charles put in a position similar to Lady Marchmain: watching the man he loves slip into alcoholism, trying and failing to save him, and eventually losing him altogether. There are also parallels between the boys’ relationship and the later affair between Charles and Julia. These parallels increase the sense that the relationship is a romance.

In terms of orientation, Charles shows clear signs of sexual attraction to women while Sebastian doesn’t, but little else is certain. Sebastian could be read as homosexual, but could also be asexual and homoromantic. Charles could be either heterosexual or bisexual, but, either way, shows strong signs of being biromantic. Most of the other characters read fairly easily as gay or straight, but two who show little sign of sexual interest are Sebastian’s brother Bridey and sister Cordelia. Bridey does end up marrying, but he does so late in life to someone he has known for a long time. His assertion that he is “ardently attracted” to his wife, despite not finding her “pretty”, and the fact that he has shown no attraction to anyone else, suggest that he may be demisexual. At fifteen, Cordelia aspires to become a nun, and, when Charles suggests that she will fall in love, says, “Oh, I pray not!” Twelve years later, she has not become a nun, but is “a plain and pious spinster”. She is not bitter or lonely, however; instead, she suggests that she is simply not cut out for a traditional life. Her lifestyle and choices are like those of many asexual people, and it is quite possible that she herself is asexual.

The series does not romanticise heterosexuality. With the possible exception of Bridey and Beryl, none of the marriages can be called happy. Julia and Rex’s relationship is immature and manipulative, while Charles and Celia’s marriage is cold and loveless. Even the apparently sincere love between Julia and Charles does not lead them to ultimate happiness, and the relationship ends in heartbreak for both of them. Nor do the characters find fulfillment in heterosexual reproduction. For various reasons, the Flyte children all fail to procreate, and Charles ends up estranged from his son.

In the larger context of the story, the point is that earthly relationships will always disappoint, and that the characters’ true focus should be on their relationship with God. While that may seem pessimistic, it also undermines the hierarchy between romantic and platonic love. The series presents romance and friendship as equal: both beautiful, both transient, and with a very fine line between them.